We wanted to share some fantastic quotes from over the years about being elderly.  Some of them really are words to live by!

“You are never too old to set another goal or to dream a new dream.” -C.S. Lewis

“You know you’re getting old when you look at a beautiful 19-year-old girl and you find yourself thinking, ‘gee, I wonder what her mother looks like?'” -Anonymous

“And in the end, it’s not the years in your life that count. It’s the life in your years.” -Abraham Lincoln

“How old would you be if you didn’t know how old you are?” -Satchel Paige

“Learning acquired in youth arrests the evil of old age; and if you understand that old age has wisdom for its food, you will so conduct yourself in youth that your old age will not lack for nourishment.” -Leonardo da Vinci

“To be seventy years young is sometimes far more cheerful and hopeful than to be forty years old.” -Oliver Wendell Holmes

“To keep the heart unwrinkled, to be hopeful, kindly, cheerful, reverent that is to triumph over old age.” -Thomas B. Aldrich

“Age is whatever you think it is. You are as old as you think you are.” -Muhammad Ali

“People are always asking me when I’m going to retire. Why should I? I’ve got it two ways: I’m still making movies, and I’m a senior citizen, so I can see myself at half price.” -George Burns

“Age is an issue of mind over matter. If you don’t mind, it doesn’t matter.” -Mark Twain

We recently told everyone about our expanded service area… 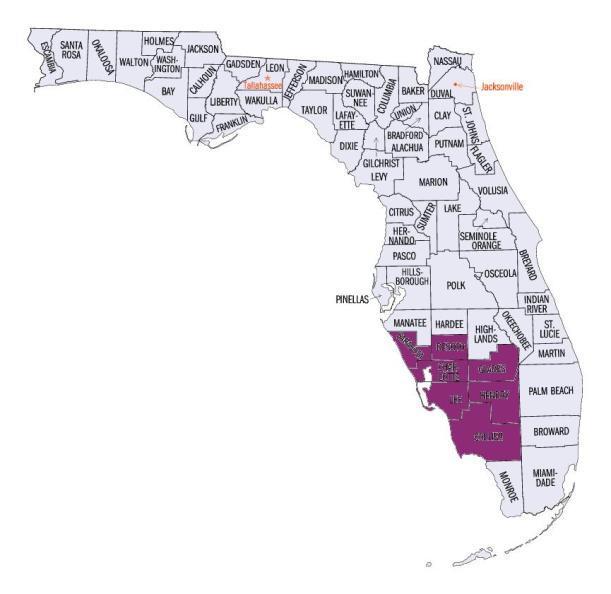 In case you missed it, we cover seven counties in Southwest Florida now, Sarasota, DeSoto, Charlotte, Glades, Lee, Hendry, and Collier Counties.  We’re fans of history around here (that massive gallery of old American flags on Independence Day might have given that away…), but in Florida, history usually means Tampa and Miami.  What about Southwest Florida?  Well, we’ve got you covered.  We’re going to go over some of the more interesting history in our coverage area over several blogs, coming back to the subject every now and then.  To kick things off, lets take a quick look at those seven counties.  Specifically, why are they called what they’re called, and where did they come from?  Those county names reflect a lot of the history around here, so let’s get going!

Formed out of part of DeSoto county in 1921, the county was named for the Bay of Charlotte Harbor, which was in turn named for Queen Charlotte Sophia, wife of King George III, in 1775.  The Spanish originally called it “Carlos Bay,” so we almost had a “Carlos County”!

Carved out of Lee County in 1923, Collier County was named for Baron Collier, a New York real estate developer and businessman who moved to SWFL and built the Tamiami Trail for the state in exchange for having a county named after him!

This one is fairly self-explanatory.  Created in 1887 out of what was then Manatee County, it was named for Hernando de Soto (1496/1497–1542), Spanish explorer and conquistador.  He famously was the first European to cross the Mississippi River, and likely first landed in Florida on that voyage very near modern day DeSoto County.

Formed in 1921 from DeSoto County, the county was named after the nearby Everglades, which were, in turn, were named partly by British surveyor John Gerard de Brahm in 1773, who called the area “River Glades.”

Formed out of Lee County in 1923, it was named for Francis A. Hendry (1833–1917), a Florida cattle rancher and politician who was an early settler of the area, and an officer in the Confederate Army during the Civil War.

Carved out of the original, massive Monroe County in 1887, Lee was named for famed Confederate General Robert E. Lee (1807-1870), and has grown to become, by far, the largest county in Southwest Florida.

Founded in 1921 out of Manatee County.  Believe it or not, the word “Sarasota” is of unknown, probably Native American, origin.  The word has been used in the area since nearly the very beginning of European colonization, but there’s no record of where it came from.  A possibility is that it’s a Calusa (the original Native language in the area) word meaning “point of rocks” or “place of the dance.”  Again, there’s no way to know for sure!

According to the Administration on Aging, when Older Americans Month was established in 1963, only 17 million living Americans had reached their 65th birthdays. About a third of older Americans lived in poverty and there were few programs to meet their needs. Interest in older Americans and their concerns was growing, however. In April of 1963, President John F. Kennedy’s meeting with the National Council of Senior Citizens served as a prelude to designating May as “Senior Citizens Month.”

Thanks to President Jimmy Carter’s 1980 designation, what was once called Senior Citizens Month, is now called “Older Americans Month,” and has become a tradition.

Historically, Older Americans Month has been a time to acknowledge the contributions of past and current older persons to our country, in particular those who defended our country. Every President since JFK has issued a formal proclamation during or before the month ofMay asking that the entire nation pay tribute in some way to older persons in their communities. Older Americans Month is celebrated across the Coun
try through ceremonies, events, fairs and other such activities. 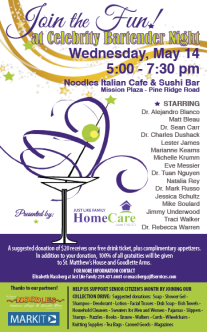 ly, we see the growth first hand and we know many of our local Seniors are in need of more than just caregivers. They need everyday toiletries, clothing, cards and more. Join us Wednesday May 14 from 5-7:30 p.m. for a Celebrity Bartender Night at Noodles Italian Cafe & Sushi Bar in Naples to celebrate Senior Citizens Month. A $20 donation at the door will provide you with a drink ticket and food.

Want to know everything you could ever possibly want to know about Alzheimer’s research, and where it stands?  This infographic that we found online will help with that.  It has an insane amount of info on the subject.  Check it out below.

We’ve made no secret of the fact that we’re proud to call Florida, the Sunshine State home, but let’s be honest: Florida gets overlooked a lot when people talk about interesting histories or facts about states.  Everyone’s too busy focusing on the weather and DisneyWorld!  It might be because although we’re geographically in the American South, Florida is very different culturally from the rest of the South unless you’re talking about the northernmost part of the state.  People don’t know where to place us!  So, in honor of the state we call home, here are 25 interesting facts and historical oddities about our state!

Well, with Tropical Storm Dorian on its way across the Atlantic, it seems evident that we’re about to plunge headlong into high hurricane season.  August, September and October are always the most active months, but in reality, how often do the storms hit our area directly?  Let’s take a quick look at the past ten hurricane seasons, some of the most active on record, to see.  Remember, tropical depressions become tropical storms, which become hurricanes, which become “major” hurricanes (category 3, 4 or 5).

We all know what tomorrow is, so we thought it would be fun to take a quick look back at all of the variations over the past 237 years of those gorgeous stars and stripes, the American flag!

But there’s a few funny things to be aware of.  First off, the first American flag was NOT the “Betsy Ross Flag” with a circle of thirteen stars.  It was a flag with the familiar stripes, but instead of a field of stars, there was a British Union Flag in their place.  This “Grand Union Flag” was very, very similar to the flag of the British East India Company.  It wasn’t until June 14th, 1777, that an official design was declared by the Continental Congress, and the familiar stars and stripes came into use, but not as a national flag, as a navy ensign, to be flown on naval ships.  And, even more interesting, the resolution passed by Congress was not specific about how the stars and stripes should be arranged, resulting in a wide variety of shapes and arrangements of stars over the years.  Arrangements weren’t made official until the 48-star flag in 1912!  Even the colors weren’t officially locked down until 1934!

In 1795, with fifteen states in the union, the number of stripes was increased from thirteen to fifteen along with the stars.  This could have gotten messy (imagine a flag with 50 stripes!), and, thankfully, they went back to thirteen stripes representing the original Thirteen Colonies in 1818, which was also when the notion of adding a star for each new state was created.  Officially, the flag’s new number of stars (and, now, the official design) becomes official nationwide on the first July 4th after a new state is admitted.  This is why there was a 49-star flag for one year, even though both Alaska and Hawaii became states in 1959, since Alaska became a state in January 1959, causing a 49-star flag to be adopted that July, but Hawaii didn’t become a state until August 1959, causing the current 50-star flag to become official on July 4th, 1960.

Whew!  Really, we could go on forever (did we mention the Betsy Ross story is probably a legend, and that New Jersey’s Francis Hopkinson probably was the actual designer of the 1777 flag?), but we’ll stop now, let you get back to your fireworks and cookouts, and let you take a look at this gallery of flags through the years!